John Nicholson, Service Director at AllWater Technologies raced to a personal best recently when he completed the 10 km challenge at Two Tunnels Railway Race in just one hour and two minutes!

This is a truly special race that not only takes in many of Bath’s beautiful attractions but also has the longest underground sections of any running race in the UK!

The Somerset & Dorset Railway closed in 1966 and until April 2013 the tunnels were sealed and inaccessible however thanks to the hard work and dedication of the Two Tunnels Group and Sustrans over 7 years, the two tunnels now have a new lease of life as a shared use path. 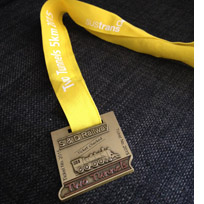 Cutting right under the city of Bath, the first tunnel, The Devonshire Tunnel is 408m long and the second, Combe Down Tunnel, is 1672m long.

Elated and a little sore (from having accidently made close contact with the tarmac during the race), John was awarded his medal and is now looking forward to completing further races later in the season.

This site uses cookies. By continuing to browse the site, you are agreeing to our use of cookies.